Whilst sipping back a complimentary Whiskey on my Cathay Pacific flight from London Gatwick, the realisation of what lay ahead of me began to kick in, 6 months is a long time, what if I don’t adapt to life on the road, living out of a backpack, staying in hostels? What if I don’t meet anyone or make any friends? Is travelling all it’s cracked up to be? How will I cope with the language barrier? I was brought up to believe that Asia is this far away exotic foreign land…etc….etc. I found the best remedy for all of these unanswerable questions was to just embrace the experience and suppress the apprehension with more Jameson!

My first destination was Hong Kong, it reminds me of an Asian version of New York City, high-rise buildings and skyscrapers around every corner, an unlimited number of places to eat, drink, shop and sleep and thousands of people on every street bustling through the crowds to get to their destination. It’s not for the feint of heart, but it has a unique charm and atmosphere which needs to be experienced first-hand. During the day the sheer scale of the place is daunting, even for someone who is used to the big city life, Hong Kong is at another level. At night the city is at its most impressive, the skyline bursts into life amidst a sea of neon lights and the best way to take it all in is either a trip to Victoria Peak or a metro ride across to Kowloon, both offering a different yet equally impressive view.

The locals are referred to as Hong Kongers or Hongkese and they pride themselves on how hard they work and how sharp they dress, with manners not exactly at the top of their list of priorities. In a city overcrowded by millions of tourists, locals and businessmen alike, it would be easy to be intimidated by this sensory overload, but this was my first destination so I was determined to get stuck in and make the most of it.

My accommodation for my stay was a hostel called YesInn, right in the heart of Causeway Bay, one of the busiest parts of the city set amongst one of the major shopping districts. This was my first ever experience of staying in a hostel, so I really had no idea what to expect. I carried out a fair amount of research, checking out numerous reviews from the thousands of people who had rated it online and honestly it was fantastic right from the start. I met so many people in my stay there who were either coming or going; some were at the end of their travels through Asia or like me just embarking on the start of an adventure, others were there to begin work or were purely there to renew a visa for China. Some of the questions and doubts I had at the start of my trip were already being answered in my first week.

During my stay I met numerous ex-pats and it seems that there is a huge demand for English speaking skilled workers from the western world, and with the opportunity of living the  big city life at a reduced rate this has evidently attracted large numbers of European and North American workers. This Western influence can definitely be seen throughout the city, especially so when it comes to the nightlife. An area called Lan Kwai Fong (LKF for short) is an L shaped street with dozens of bars, playing a mix of Western music with an Asian influence, the bars are so busy that large numbers of people head to the nearest 7-11, pick up a few beers, and just dance the night away in the street. I ended up here on my first night and had a blast.

My Highlights of Hong Kong:

Horseracing– the Hong Kongers love their gambling and the atmosphere at the Happy Valley racecourse was electric, set in the heart of the city amongst the skyscrapers there was a sense of occasion, and even though I didn’t win a penny it was still an entertaining night.

Lantau Island – The home of “The Big Buddha”- this ginormous copper statue is awe-inspiring and seeing this monument up close is a reminder of how important religion is to the locals. The cable car ride up to the top of the mountain and hike down both offered extraordinary views. 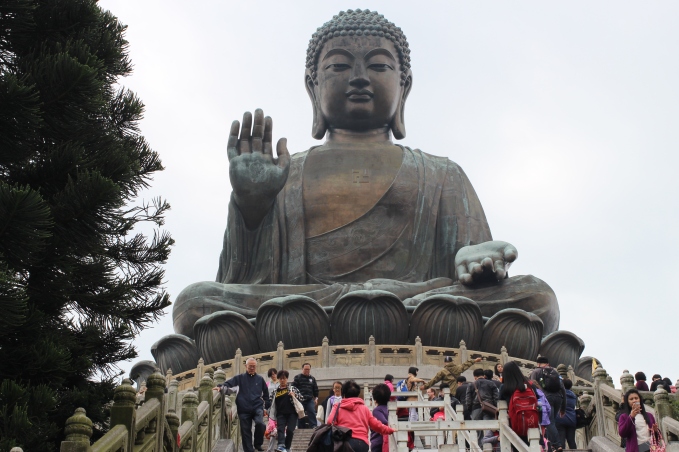 Hiking the “Dragon’s back” – One thing I wasn’t expecting about Hong Kong, was that only a short metro ride away you can be alone in the beautiful country side or sat on a beach or even exploring a tiny fishing village. There are a ton of great hiking trails and with a group of keen travellers who I met at the hostel, we completed a hike called “The Dragon’s back”. This took around 4 hours, but after the initial incline it was fairly flat and straight forward.

Victoria Peak – I made the tram journey to the top of the Peak twice, once during the day and then later again at night. There is no better way to enjoy Hong Kong’s iconic skyline, with views over to Kowloon and Lantau Island.

The Food – This was my first real taste of authentic Asian food on the trip and the Cantonese cuisine was exceptional. We had a local take us out for some of the best Dim Sum in town, the menu was entirely in Chinese so without him  it could have been quite a different experience.

So that was it for Hong Kong and the first part of my 6 month adventure, 6 days in this sprawling metropolis went by in a flash, but my next stop was New Zealand and I couldn’t be more excited.

I would be interested to hear about your experiences in Hong Kong, what you enjoyed most, any recommendations for a future visit? So please get in touch….